Don’t let others hold you back. Your will and determination can bring you an unexpected windfall.

As an early pioneer, entrepreneur, and risk-taker, Yrret was thriving in a booming railroad business. With his success, he wanted to branch out and make other investments and happened upon an opportunity that was complementary to his enterprise. One of his colleagues owned a traveling carnival and was looking for a partner. He swooped upon the deal and was able to orchestrate a profitable transaction. Within a short period of time, Yrret bought out the business from his partner and became the sole owner and operator of Llod’s Traveling Carnival.

Yrret represents both jokers and proudly flaunts his wealth while still holding true to his roots.  He wears working boots that represents that he is a blue-collar fellow and appreciates and understands hard work.  Living the life as a railroad tycoon is a dangerous occupation during these volatile times.  Like the most mid-Western gentleman, he is fully armed, but you would not know it.  He stashes a pistol in his bowler's hat, straps an exotic knife around his ankle, and walks around with a loaded bulldog cane.  This is not your typical cane.  It is a special cane that was handcrafted especially for him of his beloved pet.  The cane gun was used for self-defense to protect himself and others from marauders, thieves, and bad people.

Over time, Yrret was seen less and less by the carnies, suits, and everyone that knew him.  It is believed that he passed the business on to his family, but nobody knows.

Will Yrret succumb to the same fate as his trusted and dedicated carnival employees?  Only time will tell as his gold pocket watch ticks away if he can escape a toxic end. This is symbolic of his favorite pocket watch when the clock hands stop for eternity.  The second joker illustrates his possible demise and his inability to control his actions which are demonstrated with a hole in his foot.

These joker cards are unique not only as characters but as a grouped panoramic image.  Place the cards next to each other and they form a cohesive panoramic image between the two figures.  The cards can be placed on either side which will create a slightly different perspective. 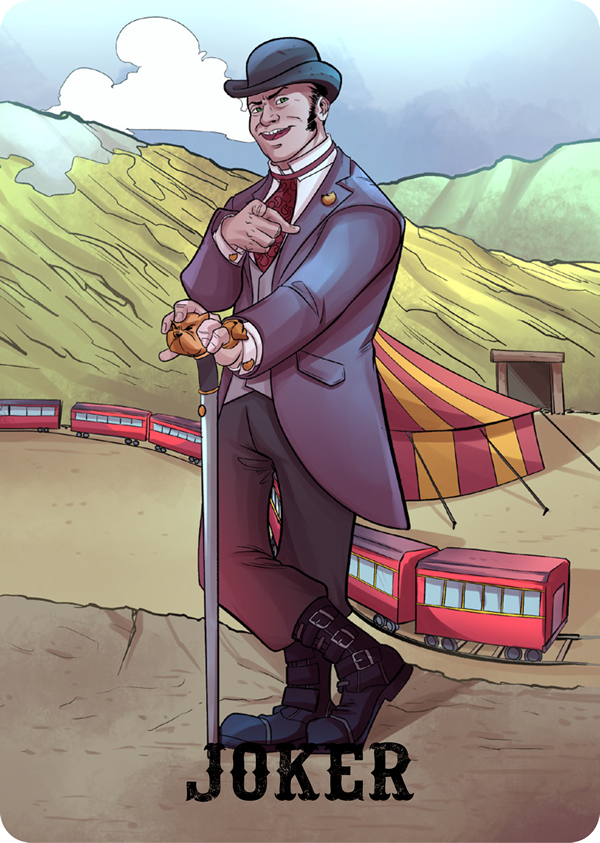 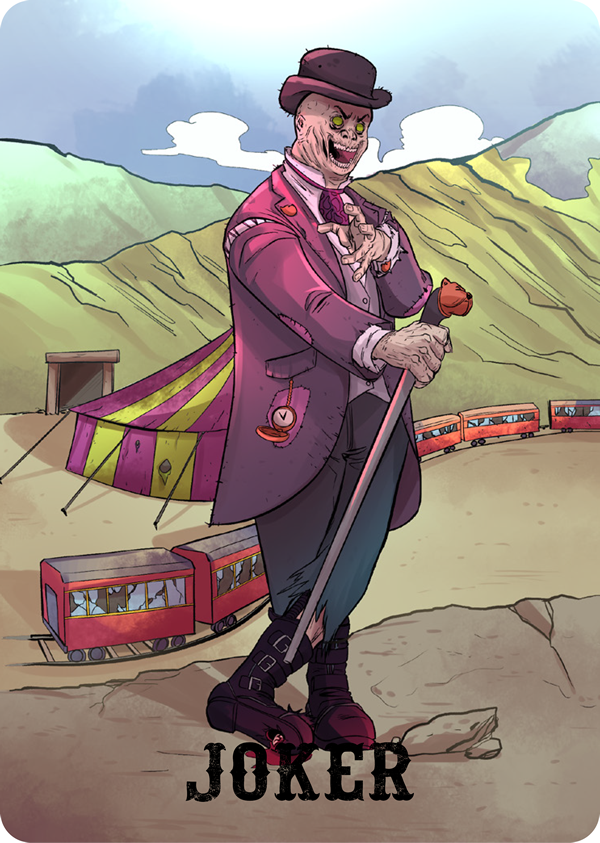