This card back is a true reflection of many things that Llod’s Carnival is all about.

The card back is a beautiful illustration of everything Llod’s Carnival encompasses.  It is very symbolic by representing everything from planets, Egypt, to the carnival.

The card is outlined by the shape of a vintage locomotive from Llod’s railroad empire.  Within each corner sits a pip from the deck.  The pips are symbolic in which they represent ancient Egyptian symbols.  The top and bottom middle have crop circles which serve as accents and a reminder that we are not alone.

The inner portion of the card is encircled by planets revolving around the sun which sits in the center.  The sun shines down upon the Great Pyramids at Giza in Egypt.  The pyramids are easy to identify and according to ancient astronaut theory they served as a magnificent source of power.  The theme of radioactive melt-down is demonstrated by one half being normal and the other succumbing to the ill effects of radiation.  The rides at the carnival are represented by the famous pig airship which provides carnival-goers a birds-eye view of everything.

The card appears smaller than the face cards because the card has a white edge that extends around the card.  It is designed this way because over time with use, the card may loose color at the edges.  Because the edges are white, they will have a timeless look to them over the years. 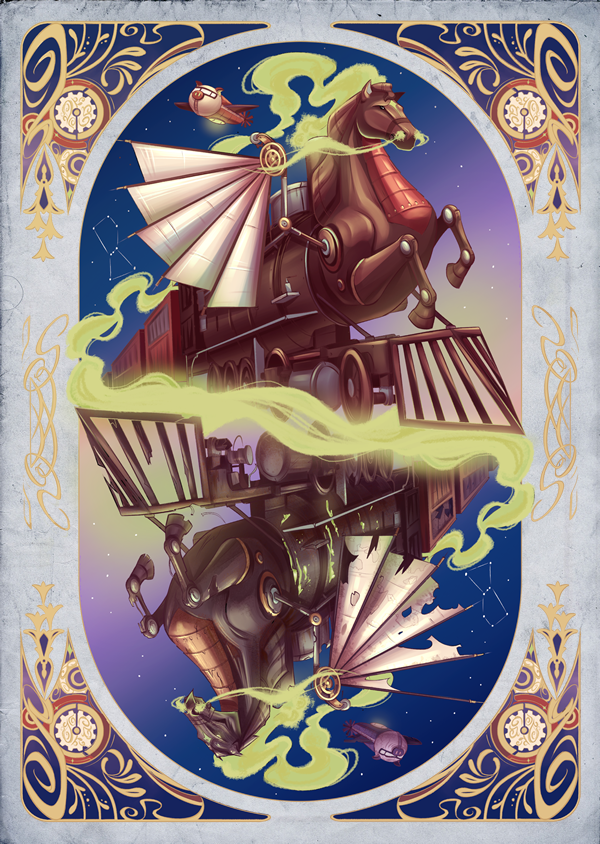