Knowledge is at the heart of every civilization...

Thoth is part of the mysterious Suits organization and conceals his face away from human beings with his hood.  The role of this alien within the Suits organization is unknown. Most of the time, if you are a Suit you might see Thoth writing, doing incantations or using mental telepathy to communicate with others.  This creature is very wise and usually is 3-4 steps ahead of what you may already be thinking. He is very resourceful and adept at providing knowledge to all they encounter. It is known that these creatures impart their knowledge upon most civilizations they interact with.  The reason may be for devious acts or for the sake of advancing the civilization. However, his presence at the carnival and relationship with the Suits is even more puzzling. Thoth may be susceptible to the ill effects of the Llodscovium radiation. He yields his Was Sceptre in what appears to be an attempt to heal and circumvent the ill effects of the alien radiation.

The pyramid pips represent the vehicle which transports these aliens from galaxy to galaxy.  These vehicles have mostly been a myth, but past witnesses that have seen them say they defy space and time.  They move astoundingly fast and erratically in a blink of an eye without any turbulence or noise. The Great Pyramids at Giza and many other related earthbound structures are modeled after these incredible spaceships from ancient civilizations to the present time.

Thoth is an enigma to most and we can only rely on the ancient texts to provide us with clues as to his mission on earth. 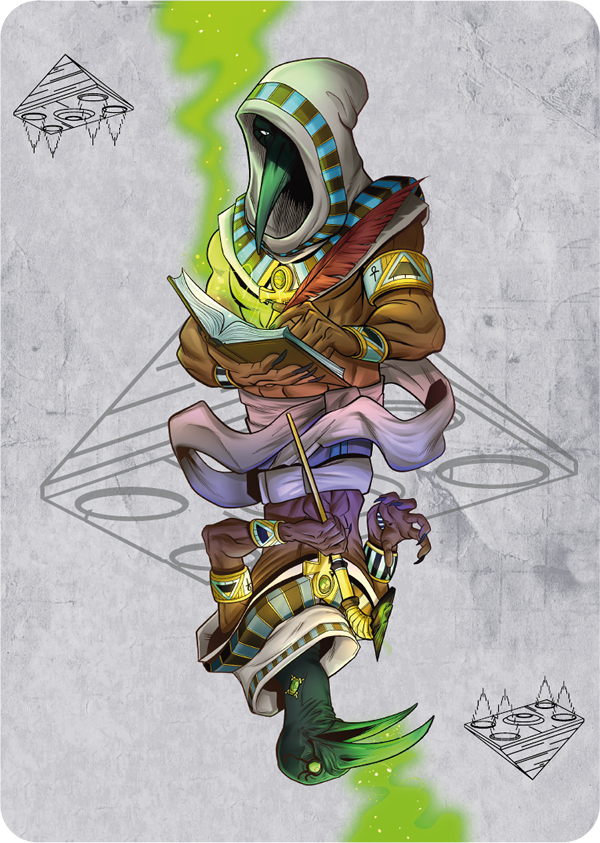